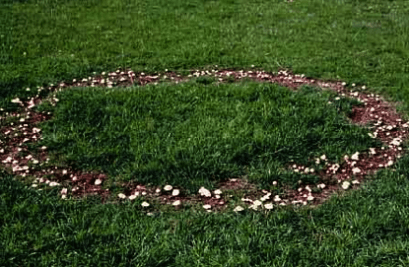 What in the world is a “fairy ring?”

There are many myths surrounding fairy rings and their origins. “For the most part the myths involve fairies or supernatural creatures either dancing around the ring, or have the ring serving as a portal between the fairy realm and our world. It was also believed that the circles were formed by shooting stars, lightning strikes, or were the work of witches,” (Find out more: ancient-origins). While the folklore is amusing, there is a much less magical explanation for the formation of fairy rings. Simply, a fairy ring is a circle of mushrooms that develops as a result of decaying organic matter, like an old tree stump and its roots, in the soil.

What is the difference between regular mushrooms and fairy rings?

There are over 8,000 types of mushrooms in the world, all of which are considered “decay fungi.” This means that all mushrooms feed off of decomposing organic matter in the soil. Fairy rings are a variation of the fungus that produces mushrooms, and they tend to thrive in poor or sandy soil. Other mushrooms are common in most lawns, especially after rainy weather.

What else can happen to your yard as a result of a fairy ring?

Keep in mind mushrooms are the fruit of a fungus. The mushroom is what we see, but the fungus actually grows under the grass. A fairy ring is just a variation of the typical mushroom-producing fungus. The initial symptom of fairy ring fungus is the appearance of mushrooms in small clusters or circles about a foot in size, which expand little by little year after year. The growth of these ring-causing fungi can infect, and even kill, the grass/turf above. Three types of fairy ring symptoms are observed in regular grasses: Type
1, Type 2, and Type 3. 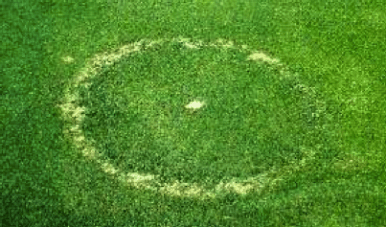 Type 1 causes the grass and soil to be unable to retain moisture, resulting in dead patches
or circles/arcs. The dirt and grass becomes so dry that it actually repels water instead of absorbing it. Type
2 makes darker green, fast growing circles of grass appear. Type 3 is the mushroom producing type.

The symptoms can vary from one type to another throughout the year as weather conditions change. Types 1 and 2 symptoms are more common during hot, dry summer months, while type 3 symptoms are more prevalent during extended periods of wet weather. Talk about Louisiana being a perfect breeding ground to experience all three symptoms simultaneously!

How do you get rid of it?

Treatment varies by symptom. For Type 1(extreme dry patches), the soil under the fungus needs to be watered! “Spiking” is a method that works well! Treating Type 2 is much easier. It involves the application of iron and nitrogen to the surrounding areas to “green-up” the rest of the lawn. For Type 3, knock down or mow-over the mushrooms and treat for Type 1 or 2 once other symptoms appear. (Find out more about Types and Treatments at turf files and MI Botanical Gardens.)